In the good ol’ days when Sam and I were backpackers, we freely roamed the world, not knowing what we would eat or where we would sleep. Five years on, holidays longer than a week are an absolute luxury and so when decided this year to take off a whole 16 days to visit Tuscany and Umbria, we knew we needed to plan to make the most of out it.

For months prior, I spent countless hours researching places to visit but more importantly places to eat. The lovely posters at Chowhound were our most valuable source of coming up a shortlist of possible restaurants to dine at. The way we saw it, 16 days = 32 restaurant meals give or take.

So after all that hard work eating our way through the region, I have decided that for part IV of my Italy series, I’m rounding up our favourite four meals.

This small beautiful medieval town is home to La Saletta, a family run restaurant which emphasises on seasonal, local produce. With his 80-year-old mother in the kitchen, dear son runs the restaurant floor with efficiency and professionalism. Wine lists are extremely reasonable and a variety of freshly made bread is sliced as needed.

Appropriately named ‘sleeve’ pasta cinghiali (wild boar) ragu was rich and tender, and whilst it doesn’t appear to have a lot of sauce, had sufficient moisture to encapsulate the al-dente rings of pasta. 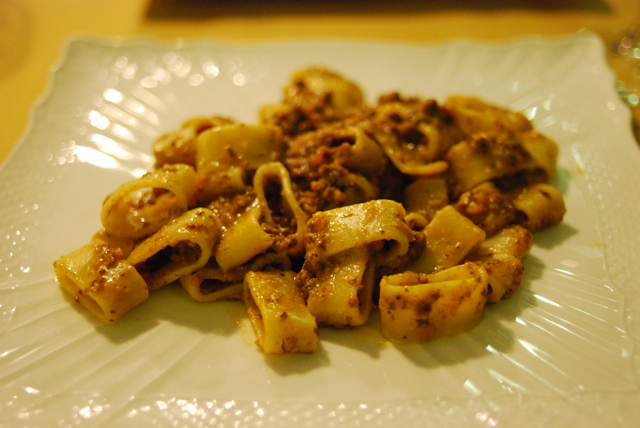 A fillet steak cooked to medium rare perfection was finished off with a thick Brunello di Montalcino sauce. The sauce was a clear star in this dish as it combined sweet certaldo onions, grapes and the Brunello to create something that was simply magical.

It was truffle season in Umbria, and there was no chance that Sam was going to miss out. Unfortunately forced to cancel our truffle hunting expedition due to bad weather, we figured the next best thing would be to find a good restaurant to eat them.

Strangozzi is the thick ‘spaghetti’ typical of the Umbria region. Made from semolina and water, the rough surface of the pasta means it clings better to sauces. La Pallotta served up am amazing home-made al-dente version of this pasta, tossed simply with umbrian olive oil and topped liberally with black truffles. Could we ask for more?

Prior to the trip, we probably didn’t do as much food research into the Umbria region as we did Tuscany, primarily because it’s Tuscany that’s most renowned. Had we know what we know now, we probably would have eaten a few more of our meals in Umbria.

Bevagna is far from the most picturesque towns in Umbria. In fact I think it was the only Umbrian town we visited that wasn’t photographically perched atop a hill. But its secret gem is La Trattoria del Oscar, a small husband/wife run modern trattoria serving amazing food at very reasonable prices. Set across two levels, the bright restaurant seats around 30 and even boasts part of a Roman wall in its basement.

Let me make it clear that Sam and I will rarely order a soup at a restaurant. Not that we don’t love soup, but it has more to do with the fact that soup often doesn’t allow room for a ‘wow’ factor. La Trattoria del Oscar proved us wrong.

Our Pumpkin squash soup was a creamy, rich, smooth and velvety bowl of such intense pumpkin flavour I was blown away. Call me crazy, but it tasted like pumpkin should taste like. Served with cooked pieces of mouthwatering chianina beef and topped with soft pecorino, this dish was literally heaven in a bowl. 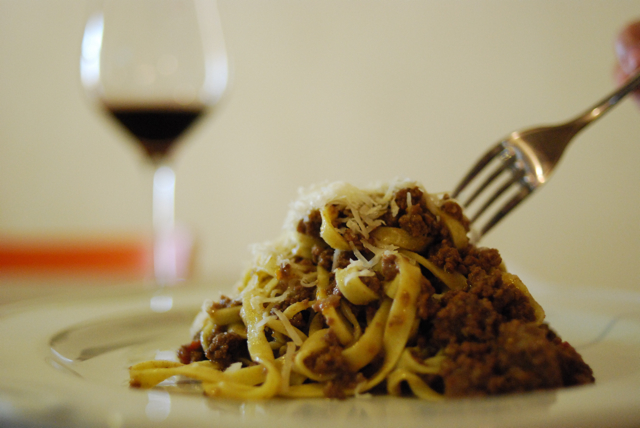 Any visitor to Tuscany or Umbria is guaranteed to eat ragu’s and a lot of them. Nearing towards the end of our holiday, we almost went against the recommendation of our waitress to order the pappadelle al ragu di chinina. Luckily we didn’t as this was by far the best. Perfectly handmade pappadelle tossed in a rich, sweet chianina beef ragu. Fantastic.

La Fiammetta is a relaxed, no fuss casual trattoria not too far from Piazza Navona. Famed for their eggplant parmigiana, it was their knockout penne carbonara that we fell in love with. There are no better words than to describe the dish as a no-nonsense plate of rustic love. Al-dente pasta was tossed in a rich sauce of egg yolk and fatty tasty speck. This dish took me beyond my wildest dreams of what good carbonara could taste like. Blow your socks off dining.

So there is it, four our our most memorable meals of the trip. Now that it’s all written and posted, I am amazed to see how I even managed to choose my favourites.

If you enjoyed this post, please have a look at my other Italy posts:

Italy Part I – the quest for offal