Within my circles of friends, I am usually always the one to ‘pick’ a restaurant for catch ups. I actually find it rather annoying truth be told, as it doesn’t often allow me to try new places, or when I do choose somewhere new, I am always worried that the place is going to be a flop. So it was rather refreshing that someone else chose and booked the restaurant for dinner for an early Wednesday evening in Soho.

Having read a few good things about the Patara from Chowhound boards, I was rather curious to see whether this international chain (8 branches internationally, including 4 in London) could produce decent Thai food.

Verdict – it does, but like with anything good, it does at a cost.

The restaurant decor is surprisingly quite beautiful – dark wooden carvings, mood lighting, sleek thai furnishing; and the restaurant is spread across two floors. On our visit, we were the first to arrive at the restaurant, but were soon joined by a few other tables. 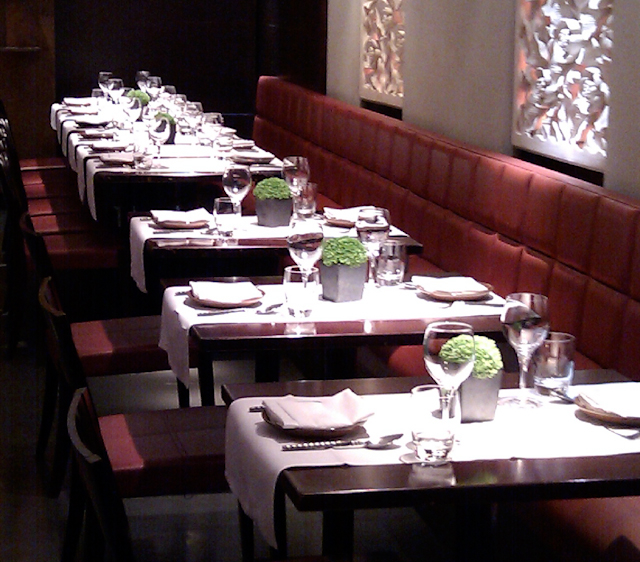 For once I left the responsibility of ordering with our mate L and instead snacked liberally on prawn crackers whilst we waited for our starters. Not one to usually eat prawn crackers, I was addicted to Patara’s as they actually tasted like prawn. Not artificial prawn flavouring, but real prawn! 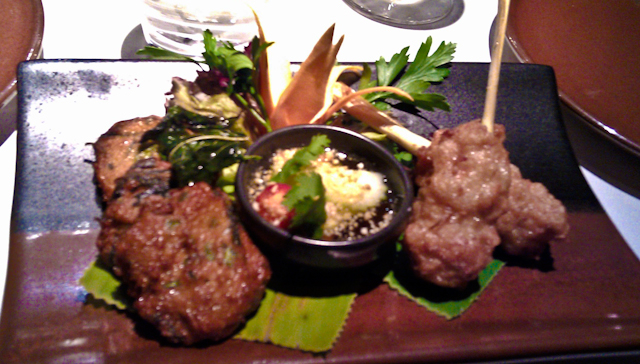 First starters to arrive were Thai fish and prawn cakes. Both were tasty and ‘bouncy’ and were fairly decent portions. The prawn cakes (pictured above on a skewer) were really very Vietnamese in flavour and texture. Satay chicken plate arrived next, and the thigh chicken meat whilst not as charred as I would like, came with a delicious satay sauce. I went back for seconds, just for the satay sauce.

Tom Yum soup (unpictured) was a really good balance of sweet, chilli and sour and by far the best I have had in a while. There were also quite a few prawns in the broth.

Pad Thai with prawns arrived next. I really love Pad Thai as a dish but I generally have problems with the Pad Thai you find outside of Thailand. I enjoy my noodles a little wok ‘charred’, with a good balance of  tamarind, sugar, tomato paste all finished off with a squeeze of lime. Patara’s Pad Thai prawn was really quite good. It had a decent amount of tomato which brought an extra acid dimension to the dish. The prawns were also probably more mini-langostines than prawns they were that big!

Lamb shank red curry whilst not altogether traditional was probably the best dish of the night. Slow cooked and falling off the bone, this dish didn’t last long on the table. The red curry was fragrant, but perhaps not spicy enough.

Our last dish, stir fry aubergine was nicely sweet and well cooked. Whilst I don’t recall how much the dish was (no menu online), the serving potion is rather expensive for the price.

Overall Patara is a bit more expensive than the average Thai. Starters come in at around £8-10, and mains around £15-20. Rice portions are quite small also and even Sam found himself needing bit more than a single rice serving.

At £30 per person it wasn’t quite a bargain meal, but I have been told they do a rather good deal £15 lunch menu which includes a main and starter so I may be back in the future to try this.