I’ve recently started to play badminton in Camden, so we are constantly on the lookout for good places to grab a quick and cheap lunch afterwards. After reading quite a few positive write ups about Yumcha in Camden a we decided to pay a visit, a little sweaty but absolutely starving.

The restaurant is more Camden chic than Chinese with relaxed wooden tables and casual cafe layout. I was almost worried we were in the wrong place as the restaurant was fairly empty, but sure enough a chinese dim sum menu was placed in front of us with all the standard London options. 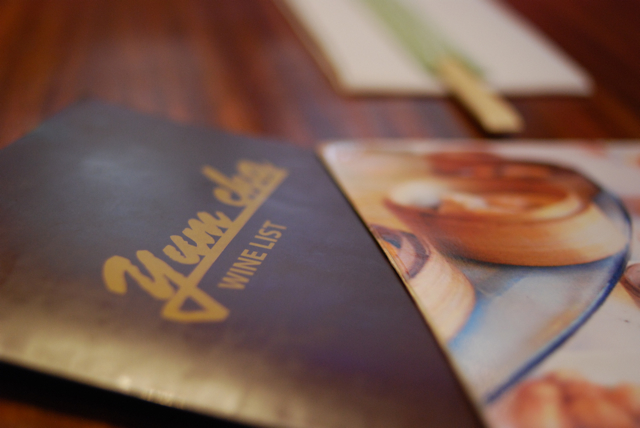 I felt a little confused dining at Yum Cha. Clearly the offer is chinese dimsum, but I really struggled to figure out which language we should be speaking. Often in Chinese restaurants they will ask in english ‘how many people’ upon entering, but if you respond in Chinese, the rest of the meal’s conversation is in Chinese. At Yum Cha it wasn’t like that at all. Strangely our waiter and waitress would speak to us in a mix of both Chinese and English. Picking up on this we asked for a few things in Chinese only to be replied to English. It was rather bizarre.

Our egg tarts came out first. Not one to complain about sweet before savory, I happily gobbled mine down – made easy by the buttery flakey pastry with warm custard centre.

A selection of steamed dumplings arrived soon after. The prawn and chinese chive dumpling was quite alright (left). The rice flour skins were thin and rather delicate but the prawns inside were a little mushy. Chiu chow pork and peanut dumplings (right) were plump dumplings of marinade pork mince and mushrooms with the additional of peanuts giving the dumplings a good texture. 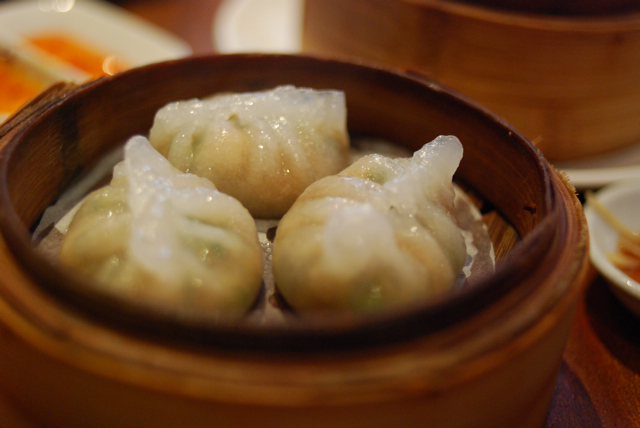 Skin on the scallop dumplings (right) were similarly delicate and the scallop inside had a good texture. Shu mai pork dumplings (left) on the other hand looked and tasted quite sad and my bet is that they were from frozen. 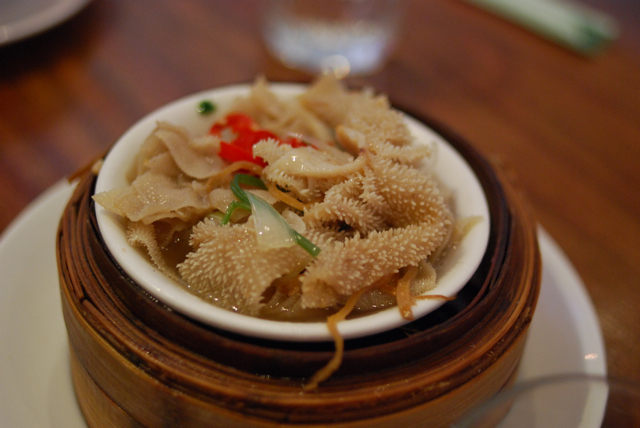 Steamed noodle cheung fun with fried doughnut stick was let down by the old fried breadstick. Shame as the steamed noodle was really nice and fresh.

The last dish we ordered – steamed greens in oyster sauce luckily ended up being a redeeming clean dish of steamed choy sum vegetables with oyster sauce. Exactly as described.

With sweet cravings being satisfied at the start of the meal, there wasn’t a need to order more dessert though another round of egg tarts were tempting!

In our experience I found the food really up and down, but no different to a lot of the standard dim sum places in Chinatown. Perhaps I visited on an off day but I probably wouldn’t make the effort to back just for the dim sum. Prices are on the cheap side for dim sum (£2-3) but at the same price range you’d be better off visiting Dragon Castle in E&C. If you do find yourself in Camden for Yumcha a safe bet would be to stick with the steamed rice flour dumplings.

At £38 for 4 including service it was cheap as chips but I’m not sure if I’ll be rushing back soon.