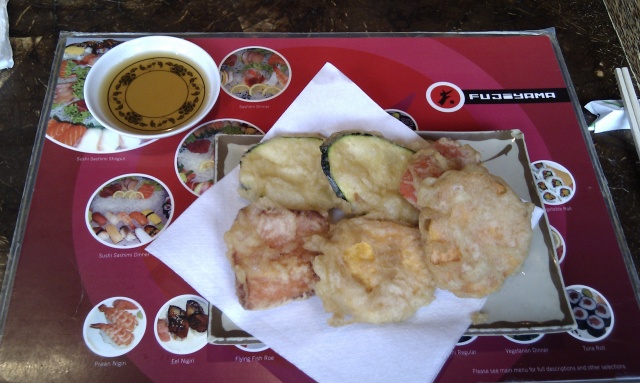 Pre-theatre (or pre-gig) meals have been a really good way for us to explore areas of London that ordinarily we would not have explored and in some cases we have found some true gems that we keep going back to.  Finding a good pre-theatre is not always as easy as it should be as many restaurants are just not able to tick off all three of the quick, tasty and good value criteria.

Our search for a good value pre-theatre continued in on Saturday night before a gig at the Brixton Academy. A quick poke around on chowhound boards pointed towards Fujiyama as a quick at cheap Japanese restaurant in a canteen type environment – seemed perfect!

A ride on the Victoria later, we arrive starving and ready to get our sushi on. Leaving our major ‘raw’ sashimi fix to be satisfied by Sushi Hiro or Kiraku, we decided to order a sushi heavy dinner, with a few hot dishes. We started off with a yasai tempura which whilst wasnt an amazing rendition of the dish, was cooked decently. We would have appreciated a bit more dipping sauce as we ran out pretty quickly.

What followed was an order of 3 different sushi rolls – a spicy tuna roll, salmon skill roll and a dragon roll. At around £4 each the spicy tuna rolls and salmon skins rolls represent awesome value. The sushi is actually categorised as ‘thin rolled’ on the menu, but really there is nothing thin about these rolls. The salmon skill rolls were nice and crispy without the taste of old cooking oil that you sometimes encounter. The spicy tuna rolls were decent, but could benefited with a touch more spicy sauce. The dragon roll at £8.95 was not as great value, especially when other sushi places such as Kiraku in Ealing, offer far superior similar type rolls at identical prices.

The last item we ordered, we really shouldn’t have bothered as 1, we already had enough food and 2, I had a feeling when I ordered it wouldn’t be any good. The best thing about the miso chicken ramen I can say is that the portion is incredibly generous. As I predicted the noodles would be from dehydrated and the broth a straight miso paste – it wasnt awfully bad, but it was something I could definitely whip up for a quick meal at home.

Somehow we managed to eat it all and escaped with a bill of less than £35 including a beer or two. Service was a bit strange, but for the price, speed and value of the thin rolls, it’s somewhere we could possibly come back to for a quick before night-out type of dinner.