It was a rare occasion that Sam wasn’t working on a Sat night, so we decided to make the most of it and enjoy an easy dinner at the Anchor & Hope in SE1 –  rated as one of London’s best gatropubs. 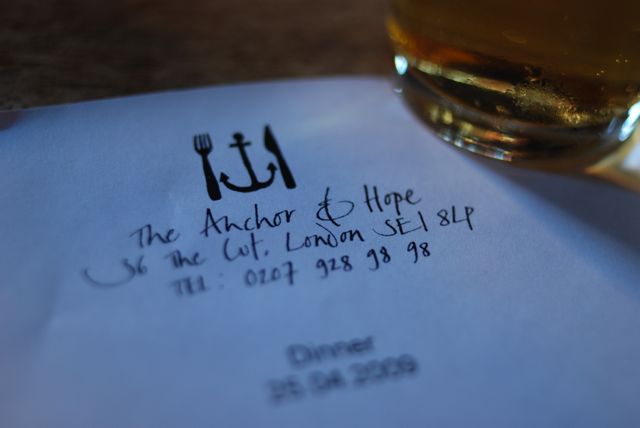 With the sun shining and day light saving in full swing, we enjoyed a few drinks in the early afternoon, including a few delicious bottles of Gruner Veltliner (almost like a dry German riesling).

After spending the afternoon drinking to our hearts content, we took a quick sqiz at the menu and immediately decided on the Roast rib of beef served with a Bearnaise and fries (£44 for two). Being a Saturday night, the place was absolutely packed, though as we had already secured a table, we chose to eat in the bar area rather than the restaurant.

Unfortunately a few things happened, which put a bit of a damper on the evening. The mains took forever to arrive (we were pretty happy and on the drink, so for us to notice the wait meant something… it really was forever). And unfortunately, when our beef arrived, it was more medium well, rather than the medium rare we ordered. The first waiter that delivered our beef was a bit unprofessional, telling us that this indeed was medium rare and it was just the light – which got Sam pretty angry. The manager however saw that we were really not impressed with this lame excuse and went to see what she could do. Unfortunately they had sold out of the beef, so weren’t in a position to re-fire, but were willing to make up for it. 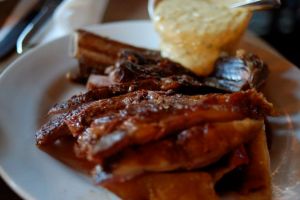 Being absolutely starving, we decided not to worry and just to eat it as is. It actually still was pretty nice, tender, juicy beef served with a fantastic Bearnaise, though we couldn’t get it through our head how anyone could consider this medium rare. (By that time the beef had cooked itself well).

We finished the meal with a few desserts including a cheese plate, chocolate pot and pistachio cake which were not outstanding, but decent. The dessert and a few beers ended up being comped by the end of the night which ensured we will return, but perhaps only to try the beef rib properly cooked…

Overall a good night, spoiled by just one silly waitstaff…